Chemistry researchers have successfully isolated a much-sought after iron compound—a 13-Fe atom cluster that is a prototype of ferrihydrite—the most abundant form of iron in natural systems, including our water, soil and the human body. Although scientists have long known the iron oxide cluster might exist, they could not study it because they couldn’t isolate it.

Due to its high negative charge and reactivity in water, this ‘crypto-cluster’ has proven extremely elusive in an isolated form. That is, until now.

Oregon State Associate Professor of Chemistry May Nyman and her team were able to capture the iron cluster—known as the Keggin ion, Fe13—in a discrete, stable form.

These findings were published in Science magazine today and supported by funding from the US Department of Energy’s Office of Basic Energy Sciences in the Division of Materials Sciences and Engineering. Lead author Omid Sadeghi, a second-year doctoral student from Iran, conducted much of the experimental in collaboration with Lev N. Zakharov, director of the University of Oregon’s X-ray infraction lab, and Nyman.

Here’s how it works: Nyman’s team used “protecting chemistry,” or strategically placed counterions to balance the high negative charge and temporarily mask the characteristic highly reactive chemistry. These atoms form a protective shell and stabilize the iron cluster. Without this protective shell, ferrihydrite forms immediately, preventing scientists from fully understanding how it actually forms. With additional controlled chemistry, Nyman’s team successfully removed the protective atoms, partially or fully, to track the conversion of the iron cluster to ferrihydrite.

The significance and impact of this breakthrough is profound: By isolating the iron oxide building blocks, scientists can gain an in-depth understanding of how ferrihydrite and magnetite form in nature and, notably, ferrihydrite’s role in iron regulation within the body.

Ferrihydrite serves vital roles in the interrelated events of contaminant transport, pH control of surface and ground water and microbial activity. As a result, this discovery may have major implications in our health, food supply and agriculture as well as bioremediation. 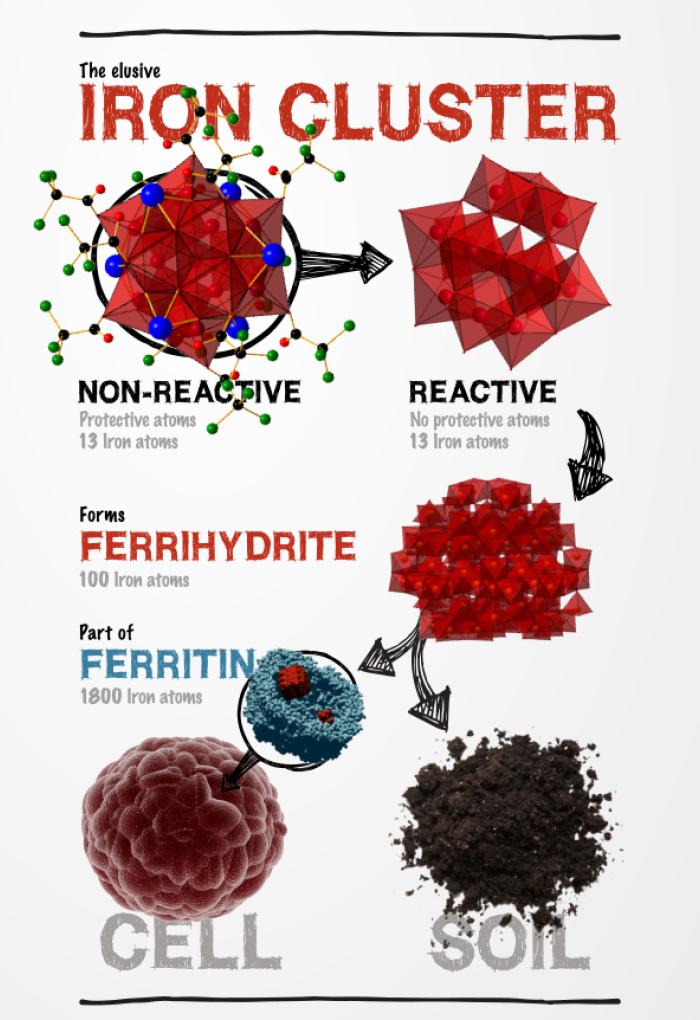 This synthetic approach to iron oxide provides a long-sought missing link between single iron atoms and iron oxide nanoparticles that will enable a deeper understanding of the most ubiquitous phases in the geosphere and biosphere.

In a late-breaking discover just this week, researchers found that at room temperature the iron cluster,can readily convert to magnetite, the most important magnetic material in nature and technology. For example, magnetite in birds’ brains serves as tiny compasses that guide seasonal migration. Magnetite in the Earth’s crust tracks the North Pole throughout geologic time. Synthetic magnetite is used to remove arsenic from water, catalyze the formation of ammonia and even record audio media.

Prior to arriving at OSU in 2012, Nyman worked at Sandia National Laboratories in Albuquerque, New Mexico, for more than 14 years as a staff chemist, developing materials for energy and environmental applications. She was a Distinguished member of the technical staff at the Labs. Her research interests focus on metal-oxo clusters—small, charged pieces of water-soluble metal-oxide.

Her research group grows clusters from a variety of metal cations, including tantalum, vanadium and uranium, and uses these clusters in applications such as fabricating materials by greener chemistries and reprocessing of spent nuclear fuel.

Nyman is a materials scientist and collaborates with both the Center for Sustainable Materials Chemistry (CSMC), a Center for Chemical Innovation sponsored by the National Science Foundation, and the Energy Frontier Research Center Materials Science of Actinides funded by the Department of Energy. Both projects involve collaborating with scientists across the United States and around the world.