May Nyman, associate professor of Chemistry and mother of three children, ages 17, 13 and eight, has happily departed from the lockstep of summer vacation conventions. It is early September and she has just returned from a Department of Energy (DOE) meeting in Washington, D.C., where she joined a select group of researchers from academia, industry and national labs to help define the next call for research for solid-state lighting by DOE’s unit of Energy Efficiency and Renewable Energy.

The previous week Nyman had vacationed at Crater Lake with her family, but after returning home she threw herself into work during the Labor Day weekend while her spouse took their children kayaking.

Her husband, Dr. Matthew Nyman, whom she describes as the “primary caregiver” and her “secret weapon,” is an instructor of science and math education in OSU’s College of Education. May, who works 10-hour days during the week (usually from 9 am to 7 pm) and anywhere from three to 10 hours on weekends, is amused by the widespread public perception that academics get to enjoy three months off every summer.

“People who are serious about their careers use summer break not as a three-month vacation, but as time to get papers written and the research done or install new equipment for the lab,” said Nyman.

Nyman knows what she is talking about. She is a renowned materials chemist with a research focus on metal-oxo clusters—small, charged pieces of water-soluble metal oxides. Her research has led to advances in functional materials for environmental and energy applications. Nyman’s major contributions to fundamental and applied chemistry include pioneering new polyoxionobate chemistry that can degrade dangerous chemical warfare agents like nerve gas, developing materials to clean up radioactive waste and using Small-Angle X-ray Scattering to understand the structure of metal-oxo clusters that are expected to lead to the development of materials for sustainable, green applications.

As head of a research group comprising undergraduates, graduate students and postdocs, Nyman guides and mentors each team member, co-authors papers, manages the lab budget and spends a considerable amount of time applying for federal grants to keep her lab running. She also travels to conferences to present her work, brainstorms new research programs and networks with collaborators.

Nyman and her team are working on starting a nuclear energy project and, in addition to several ongoing projects, she currently supervises a postdoc and two students on an uranium chemistry project focused on developing new ways for uranium fuel processing.

Teaching, while very important, constitutes only one part of a professor’s responsibilities. Nyman’s official job description is 45% teaching, 45% research and 10% service, but her duties extend widely beyond these numbers. While “10% service” may not sound onerous, the reality is rather different.

A dedicated academic, Nyman volunteers to review journal articles and leads her department’s graduate recruiting committee, which involves interviewing and selecting graduate students and then working with them once they arrive on campus. Given the inescapable coalescence between service and research, Nyman also serves as an American Chemical Society Expert, providing in-depth analysis and media response to a wide range of scientific topics and events in the news.

“Any one of these could be a full-time job [teaching, research, service], but as a professor you are supposed to do all three, and do them all well. But I am a Type-A personality and enjoy working. I am not complaining about it. It is what I choose to do,” said Nyman.

The working lives of Nyman and her colleagues provide valuable insights into the oft-misunderstood academic profession. Amidst recent proposed and actual budget cuts for higher education, politicians and others have repeatedly alleged that professors don’t work hard enough and insist that devastating cuts in higher education spending can be counteracted if professors just taught more classes and worked longer hours.

In the public imagination, the myth persists that professors get three months of summer vacation and work only nine months a year. The misconceptions over the nature of work that faculty perform is often the result of the relative invisibility of academic labor (professors often work in isolation) and also general ignorance regarding the many roles and responsibilities of professors.

Nyman’s experience is borne out in a recent study at Boise State University on faculty workload, which found that professors are increasingly doing research on their own time rather than during the traditional workweek, which is consumed with teaching, mentoring, administrative tasks, meetings and university service.

Simply put, the boundaries between workplace and home remain fluid for professors, and important research is often done outside a conventional workday. As Nyman points out, “In academia, work is a lot more seamless. I have Dropbox and my office and home computers are synced, something not permitted in my previous place of work.”

Nyman worked as a research scientist at Sandia National Labs in New Mexico for more than 14 years before joining OSU’s chemistry faculty in 2012. But Nyman’s work didn’t just change; it also grew.

“I am working so much harder at my current job. The reason is because there are many more opportunities for research and intellectual growth here. Then there are the 10 people in my lab who need my supervision, in addition to my teaching responsibilities. The expertise that I had at Sandia I brought here, but now I am sharing it with a lot more people—students that I teach and students that I supervise,” said Nyman.

As part of the American Chemical Society’s Science Tuesdays, May Nyman recently participated in a Q&A session, better known as AMA (Ask Me Anything) on the online community Reddit. Officially launched in July 2015, Science Tuesdays have enabled scientific experts to discuss different chemistry topics each week on r/science, an online science community with over eight million subscribers.

Nyman’s AMA focused on the August 12 warehouse explosion in Tianjin, China, and discussed how scientists hypothesize what occurred based on limited evidence. 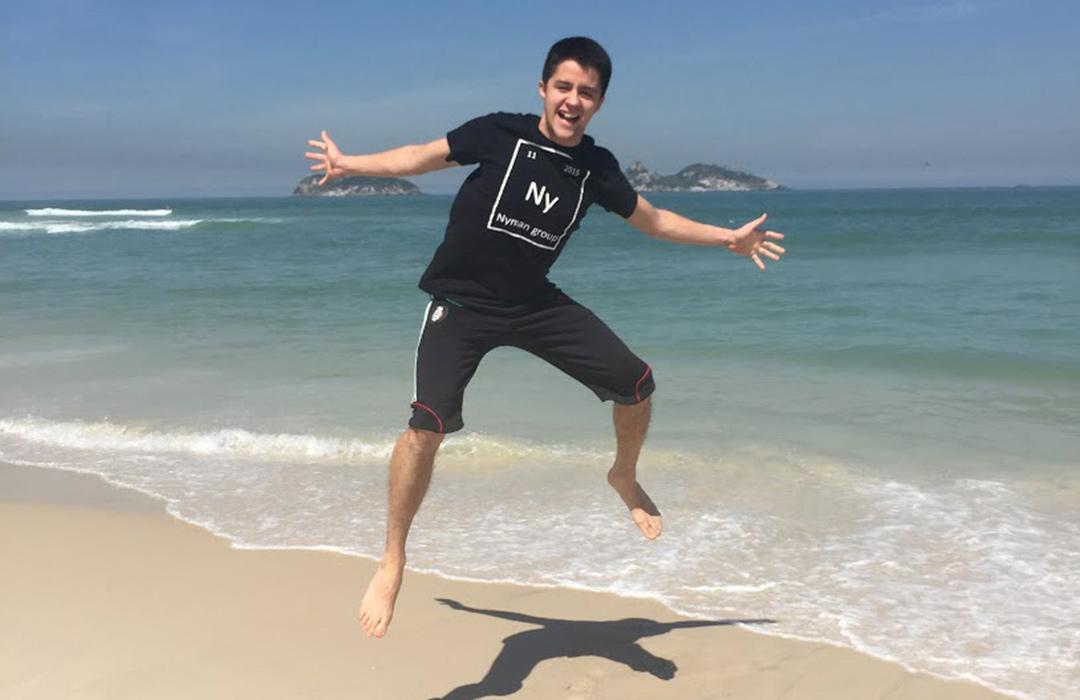 Collin Muniz, junior with a double major in chemistry and physics and a minor in mathematics

Inside the Nyman Lab: Collin Muniz

Hailing from Tuscaloosa, Alabama, Collin Muniz is a junior with a double major in chemistry and physics and a minor in mathematics. Incidentally, Muniz began his college career as a chemical engineering major. He works in the Nyman Lab and has acquired a strong reputation for his outstanding work in the Departments of Chemistry and Physics.

Soon after arriving on campus, Collin met Dr. May Nyman, now his research advisor, in general chemistry. He met with Nyman to talk about science careers and her research at Sandia National Laboratories. He remembers being engaged and excited talking with her about chemistry research. Weeks later, Nyman offered him a position in her lab. Collin said he “must have thanked her about 50 times.”

“My research experience with Dr. Nyman has been invaluable,” said Collin. "She has trusted me with so much freedom in my position. Her trust in me has led me to synthesize a new structure."

Reflecting on his two years at OSU, Collin says he wouldn't have gone anywhere else.

"The opportunities I have been offered here are truly phenomenal," said Collin. "I am essentially getting experience that a grad student would be getting and it makes me extremely appreciative of Dr. Nyman and the awesome experience I'm getting at OSU."

"I am so interested in scientific and mathematical discovery that I go through the proof of every equation I see and study it until I can reproduce it or prove it a different way than what is offered in the textbook."

Collin has won several OSU College of Science scholarships, including a Merrill Family Foundation Scholarship, and a NASA Space Grant.