A team of chemists have discovered a cytotoxic ring-expanded isomer by enantioselectively synthesizing mandelalide A and isomandelalide A. Or, as Chemistry Department Chair Rich Carter puts it: “We take inspiration from nature, then through a lot of perspiration, we make chemical compounds to better understand the biology.”

In this case, Carter’s team discovered how to create isomandelalide, enabling scientists to study the biology they can’t understand from the natural-occurring, but scant compound mandelalide, which allows scientists to perform preliminary evaluation of biological properties. Isomandelalide is more stable and has comparable biological properties, a huge asset for scientists studying disease, specifically cancer, and its impact on human health. Specifically, collaborator and OSU pharmacy professor Jane Ishmael found that the cytotoxic effects of the compounds were effective in treating human cancer cells, especially lung cancer and types of malignancies in embryos. 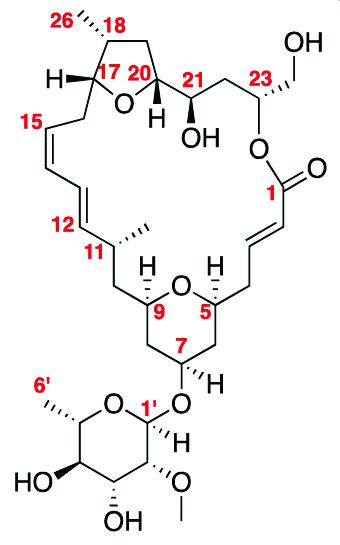 Isomandelalide will be a huge asset for studying disease, specifically cancer, and its impact on human health.

In a why-science-is-fascinating note, OSU pharmacy professor Kerry McPhail was able to isolate a series of novel macrolides from off the coast of South Africa in 2012. The compounds were named “mandelalides,” in honor of Nelson Mandela. Carter and his team of organic chemists make compounds while their collaborators in the College of Pharmacy figure out the biology, explains Carter.

“In science, we are always trying to make more of what nature gives us,” said Carter. “We always want to know more.We work to close the gap between isolation chemicals created in our lab and chemical compounds that could be a viable commercial product for pharmaceutical companies.”

Carter’s lab focuses on the total synthesis of complex, biological, active natural products. The researchers study natural products that satisfy two common parameters: 1) the target must inspire them to come up with innovative methods for its construction, and 2) the target must contain a broader scientific question or topic that engages scientists from other areas.

C.S. Lewis wrote in his 1955 novel The Magician’s Nephew: “One moment there had been nothing but darkness; next moment a thousand, thousand points of light leaped out.” Such is science.

“We’ve come so far since the 1970s when scientists searched for ‘the cure’ to cancer,” said Carter. “The cure for cancer will be 1,000 points of light—finding the best treatment for a specific disease to increase human longevity."

The findings, Enantioselective Total Synthesis of Mandelalide A and Isomandelalide A: Discovery of a Cytotoxic Ring-Expanded Isomer, were recently published in the Journal of the American Chemical Society.