Chemistry in the museum

While intersections between current chemistry research and museum exhibitions are rare, it is not surprising that the invention of a new color pigment should find its place in an exhibition that emphasizes color. A new exhibition, “Something Old, Something Blue,” at Benton County Historical Society and Museum showcases Chemistry professor Mas Subramanian’s recently discovered blue pigment.

Subramanian, who is credited with discovering the first new inorganic blue pigment since the creation of Prussian blue (ferrocyanide) in the early 1700s, is the Milton Harris Professor of Materials in the Department of Chemistry. The exhibition features blue-colored artifacts from the collections of Oregon State University Horner Museum and Benton County Historical Society.

“Benton County Historical Society is the steward of over 1000,000 objects. Looking at the collection, we saw many objects that are colored blue.” Tolonen said in an email. “Some things didn’t easily fit into a theme that would normally be one of our exhibitions, so we decided to have a blue-themed exhibition that allows more of these objects to be shared with the public.”

Subramanian helped Tolonen to create an exhibit that would tell the story of his discovery of the blue pigment and its historical import. For his exhibit, which is labeled “Something New,” Subramanian and OSU’s Chemistry Department contributed samples of the new pigment and a large Lapis Lazuli stone from Afghanistan. The semi-precious Lapis Lazuli, which dates back to antiquity, was used to produce the first blue pigment, a color that often appears in the Renaissance paintings of the robes of Virgin Mary. 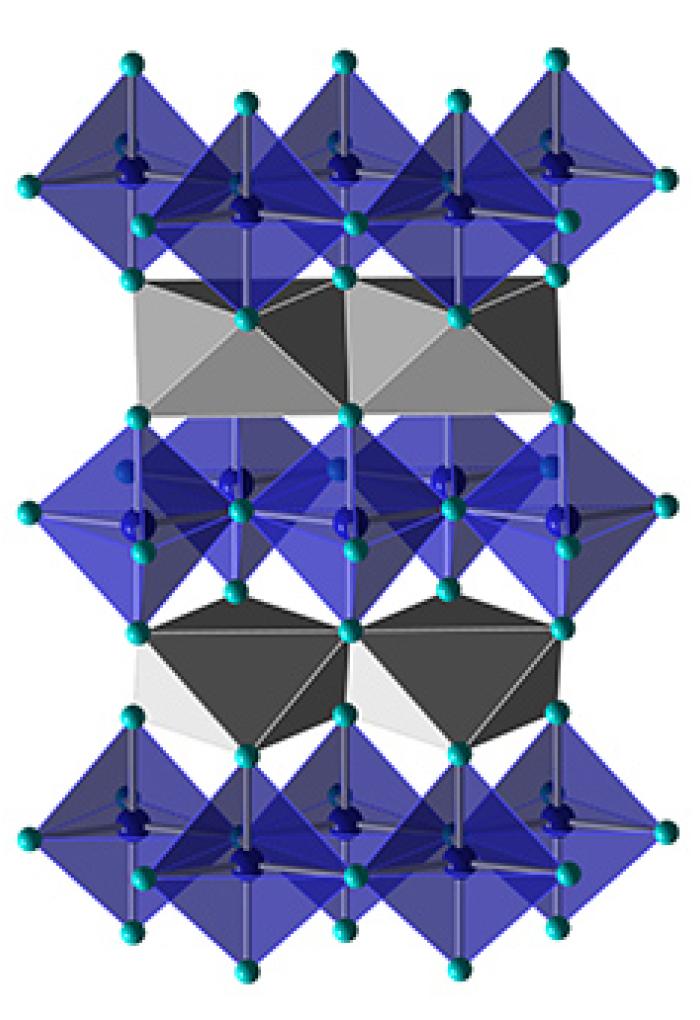 Near Subramanian’s blue pigment, visitors can see the oldest artifact of the exhibition—an over 6000 years old greenish blue clay brick from Samarra, Iraq. The exhibit also features a framed National Geographic article featuring the blue pigment discovery and an image of the “trigonal bipyramidical” crystalline structure that produced the new blue color.

In 2009, Subramanian and his team accidentally discovered the blue pigment while attempting to make new materials for computer hard drives in an OSU Chemistry lab.

Tolonen approached Subramanian about representing his work in the blue exhibition after several people showed him news articles that described the OSU scientist’s unprecedented and stunning discovery.

“Coincidentally, Dr. Subramanian’s work at OSU has been in the news a lot lately, and we were thrilled that he was supportive of including his success story with a ‘something new’ addition to the exhibition,” Tolonen said. “The Department of Chemistry loaned us some objects for the exhibition and now the exhibition includes something old, something new, something borrowed and lots of something blue!” he added.

Subramanian, who has often referred to the vibrant and striking blue pigment as an “accidental discovery,” has received wide media coverage not just on account of his history-making find, but also for the pigment’s virtues. It is highly durable and damage-resistant, cheap to produce and doesn’t harm the environment.

Since writing about the new compound in a 2009 article in the Journal of the American Chemical Society, Subramanian has gone on to work with artists, paint manufacturers, energy conservation companies and the German chemical firm Merck KGaA, which makes paint for automobiles, aircraft, plastics and ink. Subramanian and his research team also found that the same crystalline structure, that gave rise to the blue pigment, can be used with different elements to create other colors.