Alumnus and professor emeritus of chemistry Ken Hedberg (’43) has lived a lifetime of science. He has spent more than seven decades advancing science as a chemist at OSU and is the emeritus professor who has conducted research for the longest well after retirement—nearly 30 years and counting.

Hedberg graduated from OSU in 1943, joined the Department of Chemistry faculty in 1956, retired in 1987, but continues to keep regular hours in his office in Gilbert Hall, doing research, mentoring an undergraduate student and inspiring us all. 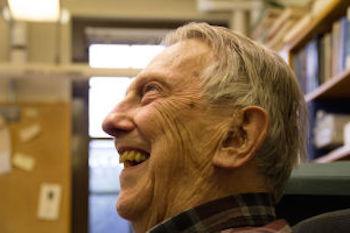 He maintains an active research program in physical chemistry, specifically in the area of molecular structure and intramolecular dynamics. His colleagues fondly refer to him as the department’s “oldest innovator.” His first publication was in 1943 and his latest one was in 2015.

In 1939, Hedberg arrived as an undergraduate, joining about 4,000 students at what was then called Oregon State College. A compulsory draft during World War II disrupted the young chemist’s plans and forced him to make a choice: chemistry or war. Hedberg was offered a position in the U.S. Air Force to train as a second lieutenant and a job in a chemical company that served the war effort. He sought the counsel of then Chemistry Department Head E. C. Gilbert who advised him to put his skills in chemistry toward the war effort rather than serving in it.

“I can still hear his words: ‘I think it would be ridiculous for you not to use your chemistry and do war work that other people can’t do’,” recalled Hedberg with a chuckle. “That was how he put it. And I followed his advice.”

Hedberg received military deferment and accepted a position as a junior chemist at Shell Development company, a major research center for Shell Oil in Emeryville, California. He worked on synthetic rubber compounds, since Japan had overrun all the rubber tree farms, and on inhibitors for aviation gasoline for propeller-driven planes. The gas supplied aircrafts in Egypt during the war, but storing the gas in the hot Egyptian sun caused the fuel to deteriorate quickly. So Hedberg and others worked on developing inhibitors to add to the stored fuel that would prevent it from degrading. America’s aircrafts depended on higher octane fuel to complete the long combat missions.

Before going to Shell Development, Hedberg finished his bachelor’s degree in chemistry at OSU in December of 1942. As an undergraduate, he conducted research on the microdetermination of hydroxyl groups in organic compounds. This exposure inspired Hedberg to pursue a Ph.D. He opted for California Institute of Technology over Harvard University and earned his Ph.D. in chemistry and physics in 1948. At Cal Tech, Hedberg worked under C. Gardner Swain and Verner Schomaker on two projects, one focusing on the oxidation of leuco malachite green and another devoted to determining the structures of various boron compounds.

At Cal Tech, Hedberg met fellow OSU alumnus Linus Pauling, who was head of the Department of Chemistry there. Pauling took note of Hedberg’s talents and intelligence and pushed him to pursue research while providing with abundant opportunities. Pauling became Hedberg’s lifelong mentor, and the two remained colleagues and friends until Pauling's death in 1994.

With stellar recommendations from Pauling, Hedberg received both a Fulbright and a Guggenheim Fellowship that took him to Norway to pursue his research and to meet his future wife and fellow scientist, Lise Smedvik. The couple collaborated extensively and married in 1954 in Oslo, Norway. The international experience led to a long professional collaboration between Hedberg and numerous Scandinavian scientists throughout the years that shaped the chemist’s broad perspective on science.

In 1956, Hedberg returned to Oregon State College as a physical chemist, where he established his research program that focused on the structural analysis of various compounds using an electron diffraction apparatus that he designed and built himself. OSU Physics Department Chair and renowned physicist Edwin Yunker (1925-68) agreed to assign a machinist in his well-equipped machine shop for Hedberg so he was able to build his apparatus.

Two years later, the enormous structure was finished. This apparatus, one of the last of its kind in the world, was the centerpiece of Hedberg's research throughout his 31 years at OSU, and was supported by continuous funding spanning multiple decades. It enabled him to obtain usable data himself rather than relying on his international colleagues to provide him with data. The new equipment attracted scientists to OSU, many were Norwegian scientists with whom he developed lifelong collaborations and friendships. 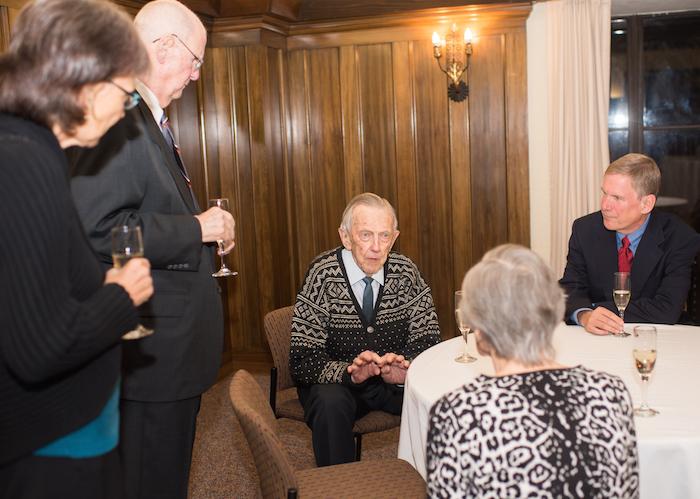 It also tethered him to OSU in a good way. When asked why he remained at OSU for his entire career, Hedberg responded, “For one, the apparatus doesn't move easily. It is huge. Secondly, Corvallis is a very nice place to work, live and raise a family. I never had any reason to leave.”

He once had a tempting offer from a prestigious research institute at triple his salary, but it was located in New York state, and Hedberg preferred to remain amid the beauty and serenity of Oregon.

As Hedberg remembers his colleagues from around the globe, he pulls out a thick binder filled with photos and memories of visiting scientists—faculty and students—who made repeated trips to Corvallis as far back as the 1950s and as recent as 2010. They traveled from England, Japan, Russia, New Zealand, Scotland, Germany, Switzerland, Czech Republic and many from Norway to study Hedberg’s research methods and work in his lab.

“We all traveled to broaden our horizons,” explains Hedberg.

Hedberg earned an international reputation, having determined the structure of dozens of molecules throughout his career, including Carbon-60—known as the "Buckyball"—and compounds of xenon, a noble gas. He is one of the world’s pioneers in the development of electron diffraction and the study of molecular structures and intramolecular dynamics.

Hedberg often collaborated with his wife, an accomplished scientist in her own right. The two worked alongside each other in the lab. When their children were born, Lise conducted research in the lab half the day and took care of the children the other half of the day.

Science seems to have run in the family. Lise and Ken’s two children graduated from Stanford University and Yale University with multiple degrees in STEM fields. His daughter, Katrina, earned a master’s of public health and an MD and is the state epidemiologist and health officer for Oregon.

Hedberg has lived a life of science: he has conducted curiosity-driven fundamental research, collaborated with and hosted dozens of visiting researchers from around the world since the 1950s, and is a caring and dedicated mentor to our students. He has served as advisor to 18 doctoral candidates and18 postdocs.

“Ken has done so much to advance science and train generations of scientists throughout his career,” said Sastry G. Pantula, dean of the College of Science. “He is a wonderful person, scientist, mentor and scholar, and I am truly honored to call him my colleague and friend.”

An internationally recognized scientist, Hedberg has received dozens of prestigious honors and awards. He is a Fellow of the American Physical Society, the Royal Norwegian Council for Scientific and Industrial Research, the American Association for the Advancement of Science and the Sloan Foundation; a member of the Norwegian Academy of Sciences; an OSU Distinguished Professor and has received many other honors. In 2005, Dr. Hedberg received the International Barbara Mez-Starck Prize, a distinguished honor awarded to scientists who have made outstanding contributions to structural chemistry. 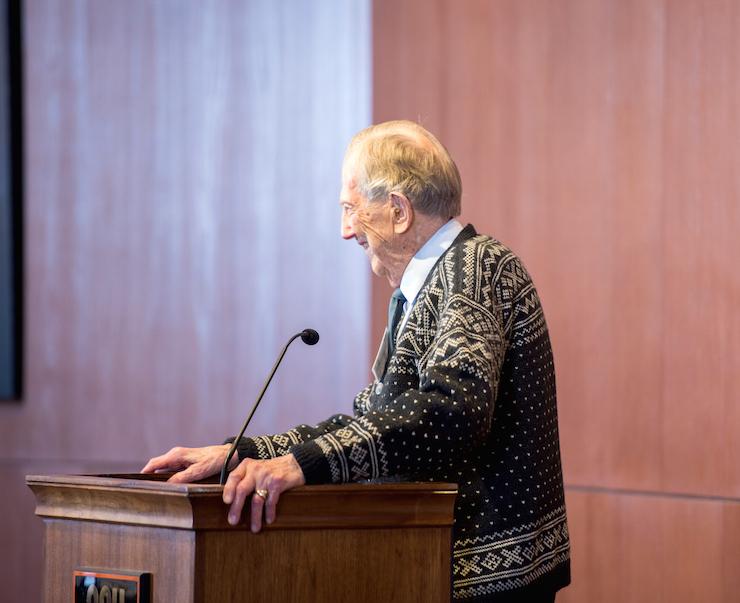 His most recent award came in 2013, the Camille and Henry Dreyfus Foundation Senior Scientist Mentor Award, which allows him to continue funding undergraduate research.

Hedberg attributes his success directly to the sacrifices his parents made during the Great Depression when his father lost his job, putting the family in financial straits.

“I was so impressed by how my mother and my father came together to see what options they had in order to do the best for our family,” Hedberg said in a 2014 interview with The Daily Barometer.

The family readjusted after multiple moves across Oregon, which landed his mother, sister and him in Corvallis, while his father took a job on the coast. The goal was for Hedberg and his sister to attend OSU. To make that happen, Hedberg’s mother ran a boarding house in their home.

“It was a lot of work for my mother — the cooking, the cleaning,” Hedberg said in The Daily Barometer article. “Almost 75 years later, I wouldn’t be here nor carrying out my research if my mother didn’t work as hard as she did.”

When asked about challenges facing today’s students, he remarks on the significant changes in the social structure of students, affected by technology that seeks to keep us all connected, all the time but may do the opposite.

“Students are glued to their keyboards, tablets or phones. They can’t imagine not having these things,” notes Hedberg. “These rapid tools really help them get things done so much faster than students ever could have done in the old days. I just wonder about what they are missing out on by not talking to each other more. I remember when I was a student all of us would be waiting to go into the large lecture hall for class and talking to each other. Today, there’s no talking.”

“Science is about people, collaborations, relationships and connections,” said Hedberg.

A familiar face in Gilbert Hall, Hedberg maintains his research and mentoring of students at age 96. He meets up with his last graduate student, Alan Richardson, for an occasional Friday beer. His gentle disposition, lively personality, sharp mind and easy smile attracts people to 6 Gilbert Hall, his office since the 1960s, for thoughtful conversations on a myriad of topics.

“I regard myself as extremely fortunate to have had all this fun during my time at OSU. And it has been fun,” remarks Hedberg. “An important thing to note about my work is that it has no practical application at all. The thing with basic science is that it may or may not have practical consequences.”

He points out that 100 years ago no one thought there was anything to Einstein’s General Theory of Relativity that revealed that light bends around objects. The theory completely transformed theoretical physics and astronomy in the 20th century. Today, that science helps us get places, literally, in the form of global positioning systems technology.